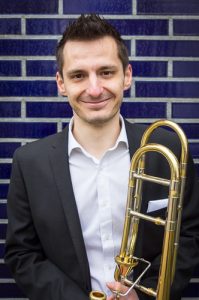 Ledion-Leonidas Zhupali (tenor trombone) began playing trombone at the age of 11. From 2011-2016 he had lessons with Pete Saunders and Timothy Dowling at the Royal Conservatory of The Hague, where he graduated for his Bachelor in 2016. Leonidas completed a minor in Education and followed a special Kodaly Method program. Leonidas completed two master programmes: a Master in Trombone at the Conservatory of Maastricht with Bart Claessens and a Master in Music Education at the Royal Conservatory in The Hague. Besides that he was taking Baroque Trombone lessons with Catherine Motuz. He performed at many festivals such as Gaudeamus Festival, Festival Klassiek, Holland Festival, Spring Festival, Festival Musicale Estense in Italy, at the Spinoza awards and many others.

As an ensemble player, Leonidas plays in many combinations. He is a founding member of the trombone quartet Slide Resistance, and plays with Catchpenny Ensemble and Camus Duo and played with the Nieuw Ensemble, Ives Ensemble  and the May B band. He plays/ed with the Nationale Operette, Charkov city Opera, Promenade Orkest, Philharmonia Amsterdam, the Metropole Orchestra Academy, the Orchestra of the Dutch Don’t Dance Division, The Royal Conservatory Orchestra and many others. He has worked with conductors as Ed Spanjaard, Jac van Steen, Lucas Vis, conductor and composer Hans Abrahamsen, and composer Christian Wolff. Also new composers collaborate with Leonidas to create new pieces.Currently, Leonidas is teaching classical trombone at the Ionian University of Greece, Corfu,  in KOO (Kunst Onderwijs Organisatie) in The Hague and he is an educational music teacher in the Residentie Orchestra. 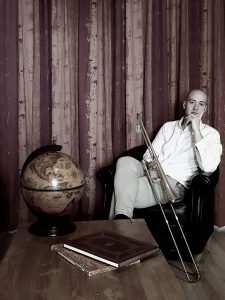 Vittorio Gentilini (tenor trombone) graduated in the A.S 2014/2015 at the conservatoire “Luca Marenzio“ of Brescia under the guide of the Teachers Guido Delmonte and Lauro Bassi. During the study courses he has attended Masterclasses with the Masters Vincent Lepape, Diego Di Mario, Devid Ceste and Matteo De Luca.

He has co-operated (from 2008 till 2015) with different band realities around the province of Brescia, has taught for the school of music of the Philharmonic Association Isidoro Capitanio of Brescia and of the Philharmonic Association Vincenzo Capirola of Leno (BS), covering in the related orchestras the place of principal Trombone. He permanently co-operates with the wind orchestra “Brixiae Harmoniae“ (Brescia, Italy) as first/second trombone.

Since 2015 he is mastering in Trombone at the Koninklijk Conservatorium of The Hague (NL) under the guide of the Teachers Pete Saunders, Tim Dowling, Sebastiaan Kemner and of the Professor Charles Toet for Baroque Trombone. From 2016 he co-operates with different orchestral realities of the Southern dutch territory (Den Haag, Rotterdam, Utrecht) as Valerius Orchestra, ZSO, Musica orkest and Ridderkerks Symfonieorkest. Equally he co-operates with wind orchestras as St. Caecilia Schipluiden and Phoenix wind band. In 2017 he follows masterclass with the international Masters Akan Bjorkmann, George Curran and Bart van Lier at the “Slide Factory” festival for which he has performed and co-operated. He graduates as bachelor from the Royal Conservatoire of The Hague in 2018. From year 2018 to 2019 he played as academist second trombone with the Residentie Orkest of The Hague.

He’s currently finishing his master degree at the Royal Conservatoire of the Hague. 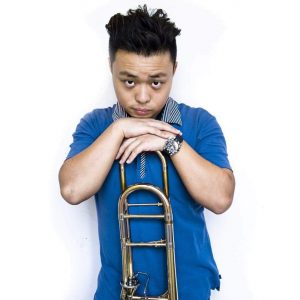 Frankie, Cheuk Nam Ko (tenor trombone) is a recent trombone master student in Royal Conservatoire The Hague. He started his trombone lesson with Winky Chau when he was 12. During studying his bachelor’s degree at Hong Kong Baptist University, he studied trombone playing with Jarod Vermette, who is the principal trombonist in Hong Kong Philharmonic Orchestra and Ben Pelletier, who is a famous classical and pop trombone player in Asia. After he has finished his bachelor’s degree, he continued his study at Codarts University for Art in Rotterdam with Alexander Verbeek, the principal trombonist in Rotterdam Philharmonic Orchestra and Brandt Attama, a well-known bass trombone soloist. 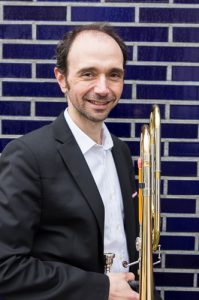 Georgios Kachrimanis (tenor and alto Trombone) was born in Athens on the 26th of December, 1977.
The trombone came into his life at the age of 15, although he had started playing music at the age of ten in his local fanfare band. Shortly thereafter he started playing in the Athens Student orchestra. The first time he played music professionally was at the age of 17, with the Radio Symphony Orchestra of Greece. In 2002 he won his current position as principal trombone of the Athens Philharmonia and in 2003 finished his studies with a 10 and first prize. During the next 10 years Georgios won other auditions and played with all the major and minor orchestras in Greece, appearing as a soloist on a number of occasions. Since he was a child he wanted to discover the source of classical music. After years of the same mediocre musical life in Greece, the lack of creativity did not seem any more to maintain the glamour in his life. So the moment came when he decided to make his childhood dream come true. He attended the Royal Conservatoire of The Hague and in 2015 graduated with a Masters Degree. 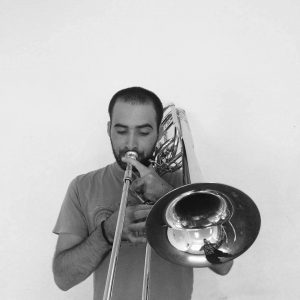